Goldie but oldie: 8 oz. clinker worth $10,000 discovered near Wells 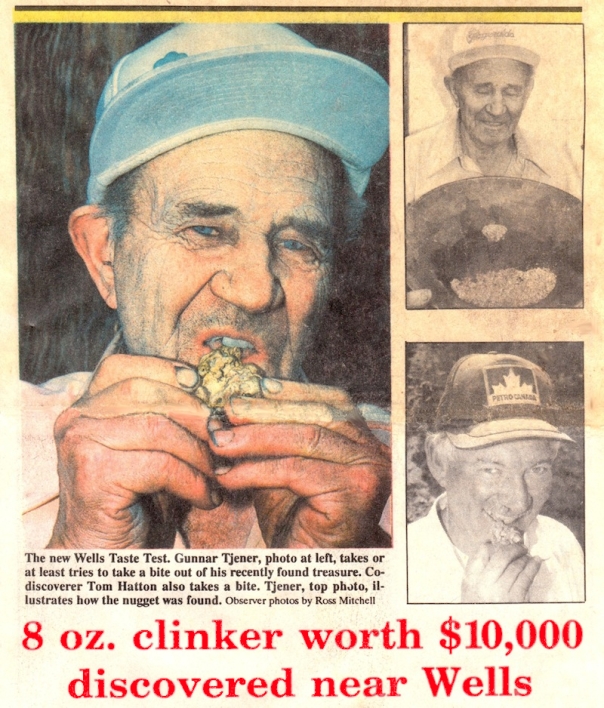 Two local men have hit pay dirt with the discovery of an 81/2 ounce gold nugget!

Placer miners Gunnar Tjener and Tom Hatton of Wells found the nugget at the end of a routine work day.

“We were planning on cleaning up (the site) the next day. I went up to shut off the pump as I usually do.

“The day I happened to look into the sluice box – and it (the nugget) was there,” said an elated Hatton.

The pair, along with Doug Merrick, usually process about 200 yards of gravel per day at their Burns Creek claim east of Quesnel. Wells resident Steve Bjornson  holds the placer mining lease and has a “working agreement” with the miners.

Work began at the site a year ago, on July 14, notes Hatton. All three men war amazed at their find, believed to be the largest nugget found in the area in the last 50 years.

The largest ever recorded was a 30-ounce nugget found in the 1860’s at Butcher’s Bench just above Stanley. Hatton said a replica of the giant nugget will be on display at the Barkerville Museum in the near future.

Already the bids are pouring in from potential buyers, he said.

“An offer of $10,000 has come in from a buyer in Reno (Nevada). But I expect there will be higher ones coming,” says Hatton, noting that the nugget’s value is in its size and character, not the actual gold content.

His partner, Tjener, is equally pleased with the find – his first big nugget in over 25 years of placer mining in the area.

Nelbar Services Ltd. has leased the upper half of the claim where the nugget was found. The claim disowned by Steve Bjornson of Gold Panners Park.
——- 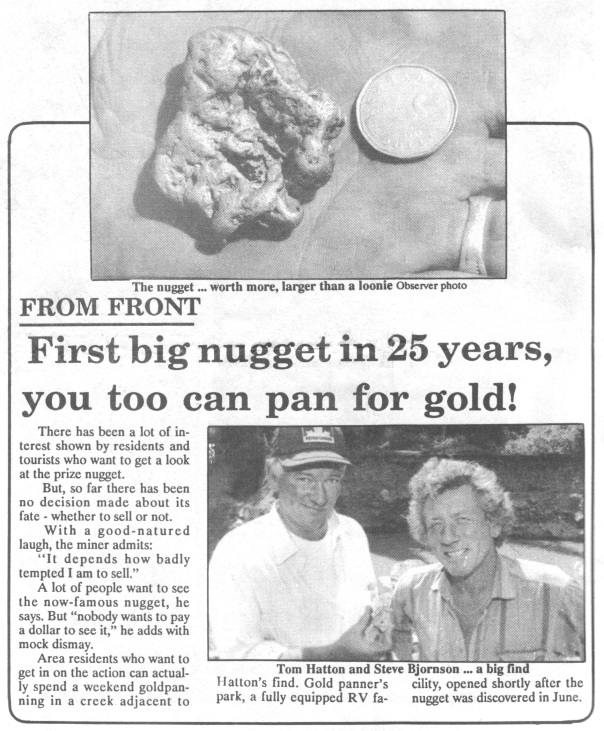