Gold diggers hunt for ‘a little flash in the pan’

[Webmin Note: While this article pertains to mainly Vancouver Island it might be prudent for local miners in the Cariboo to also be aware of this growing phenomenon and that this coming spring folks keep a sharp eye out for similar situations. Be aware.] 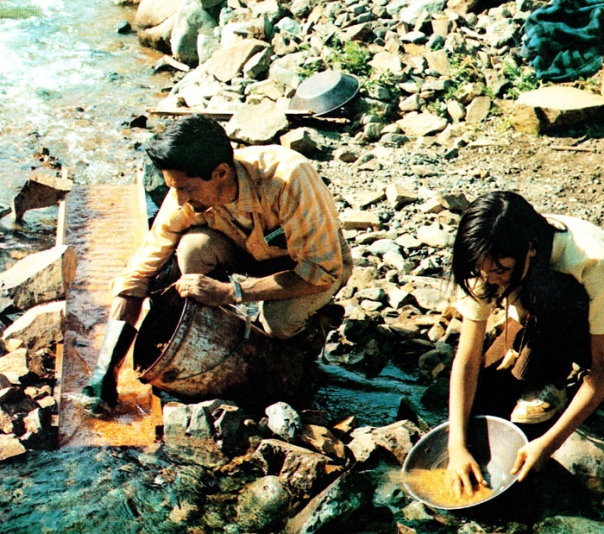 Gold diggers hunt for ‘a little flash in the pan’

With the rising price of gold and a struggling B.C. economy, gold diggers are heading into the backcountry to find their fortunes.

“There are days it feels like the gold rush 100 to 150 years ago; the hills are crawling with people looking for a little flash in the pan,” said Ian Jensen, owner of Gold & Fish Adventures in the Vancouver Island community of Courtenay.

Jensen, 42, a boiler operator, has been turning to gold-panning and gold tours every summer for two decades.

“This is more of a hobby for me … the whole thing is an Easter egg hunt. You are looking for that next big nugget and you never know when you’ll come across it,” he said.

Jensen and his colleague, Dave Mullet, 55, mine a claim just 40 minutes from downtown Courtenay. The process isn’t always easy, but it’s rewarding and recession-proof, they said.

The duo heads into the backcountry at the first sign of spring, often passing old sluice boxes and miners’ cabins set up along the Oyster River during the Island’s first gold rush over 100 years ago. They’ll hike or rappel down cliffs to get to spots that look untouched and when they find it, they spend hours bent over, sifting through rock to look for the motherlode.

“You never know what you are going to get. I dug nine days thinking I’d hit the jackpot and got barely enough to keep me going,” Mullet said.

“Then one day I was eating lunch and picking up some magnetite for the kids back home, and I see a flash of yellow underneath. I got more gold from that one spot than I had in nine days. It was huge.”

These days, with the soaring value of gold and rising popularity of shows such as Gold Rush: Alaska, the miners are seeing more competition — sometimes on their own claim. Independent miners are heading into the mountains looking for their share of gold and are not always mindful of government-sanctioned claims or private property.

Jensen said each summer he is seeing more wild-eyed, gold-lusting men searching the creeks near Mount Washington for extra cash.

Tiny nuggets can earn up to $50 and there is always the chance of finding a jackpot.

“I see men living out of their vans or in camps in the bush for weeks looking for some nuggets,” said Jensen. “One fella I came across said he was heading into the mountains for a month.”

Gold & Fish Adventure takes people to Jensen’s claim in Nugget Gulch, so it’s well-known for yielding minerals. As a result, he’s chasing more people off his 1,000-metre stretch of river than ever before.

“They are essentially stealing out of my pocket,” he said. “Back in the gold rush days when you came across a claim jumper, he’d be shot … Today we just chase ’em off, but things can get real tense some days when one of those mountain men is carrying a gun.”

Donna Deeward, treasurer for the Vancouver Island Placer Miners Association, has heard of the increase in independent gold miners, who operate within other claims or on private property.

They don’t always clean up their mess, leaving ripped-up terrain and garbage strewn near creek beds and put themselves at risk by not carrying liability insurance.

“They are kind of like push-it-to-the-limit snowboarders who head out into avalanche country. They are not complying with the rules the rest of us abide by … and their own ignorance could get them hurt,” she said.

Despite those operating outside the rules, there is also a rise in those looking to legitimately pan for gold, including families.

The Adventure Hobby Store, in Campbell River, is seeing a spike in sales of vials, pans and sluice boxes from families looking to try their hand at finding gold — or silver, copper and platinum, which are also present in creek beds.

The last two years have shown one of the biggest jumps of interest in a long time, the store owner says.

Deeward isn’t surprised. “People want to see what they can get and the gold is there being carried down by the river from its source every winter,” she said.

People don’t always find enough to make a fortune, often pulling up dust or flakes, but that doesn’t stop them from dreaming.

“The lure is the unknown. You never know what you are going to get in that next pan and when you do come across a shiny, beautiful piece of gold, all the work is worth it,” she said.

Posted on February 21, 2011, in Mining News & Views. Bookmark the permalink. Leave a comment.